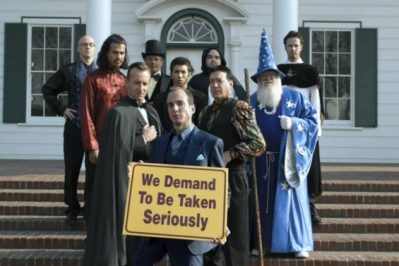 “Make an effort to remember. Or failing that, invent.”

Neo-Paganism is a contemporary religion that draws upon an­cient religious symbols from outside the traditions of the Abra­hamic religions (Islam, Christianity, and Judaism) and employs these sym­bols in a new way to meet modern spiritual needs (hence the prefix “Neo-”). Dennis Carpenter describes Neo-Pagan­ism as a “synthesis of historical inspiration and present-day creativity.”

There are modern reconstructionist Pagan traditions that at­tempt to recreate the religions of ancient pagans from existing sources. In contrast, Neo-Paganism is an eclectic religion that draws freely from many traditions, both ancient and modern, largely without concern for historical authenticity.

While Neo-Paganism has always been eclectic, this historical relativism took longer to spread to more traditional forms of Wicca. In the 1950s, the founder of Wicca, Gerald Gardner, claimed that his Witchcraft was a survival of an ancient form of paganism, passed down, largely intact, over centuries. By 1962, though, Elliot Rose had already identified the origins of Gard­nerian Witchcraft in modern occultism, “anthropological” novels (i.e., Margaret Murray), and psychoanalysis. Traditionalism re­ceived a boost from Wiccan priestess, Doreen Valiente’s, identifi­cation of Gardner’s “Old Dorothy” in 1980. But in 1991, it sus­tained a devastating blow with the publication of NROOGD founder, Aidan Kelly’s, book, Crafting the Art of Magic, which identi­fied the literary sources of Gerald Gardner’s Book of Shad­ows. Ronald Hutton’s 1999 Triumph of the Moon nailed the coffin lid on Gardnerian claims of historical authenticity as far as most people were concerned:

“Instead of a line of martyrs and embattled tradition-bear­ers, the immediate ancestors of [Neo-]Paganism be­came a succession of cultural radicals, appearing from the eight­eenth century onward, who carried out the work of distin­guishing the Pagan elements preserved in Western culture and recombining them with images and ideas re­trieved directly from the remains of the ancient past, to cre­ate a set of modern religions.”

In contrast to British Traditional Wicca, by the 1970s, Neo-Pa­gans had largely abandoned attempts to legitimate their beliefs based on speculative histories and folklore. Many turned to Jung­ian psychology to legitimate their beliefs and ritual prac­tices. By the time of the publication of Drawing Down the Moon in 1979, Wiccan priestess and NPR correspondent, Margot Adler, could write that Neo-Pagans had largely abandoned claims to historical continuity with an ancient Pagan past. Adler quoted Wiccan priest, Ed Fitch:

“the realization has come around to everyone that it doesn’t matter whether your tradition is forty thousand years old or whether it was created last week. If there is a proper con­nection between you and the Goddess and the God in the subconscious, and other such forces, then that’s what matters.”

“It doesn’t matter if the Craft is ancient. What does mat­ter is learning to accept the process of intuition that oc­curs, which rings a bell. When you are doing a ritual and you suddenly get the feeling that you are experiencing something generations of your forebear[er]s experi­enced, it’s probably true.”

“Neopaganism represents an attempt to create a reli­gious form for a post-modern world. … They experiment with life forms that science has decried as primitive and nonsensi­cal. They suggest that metaphors are truth and that science fiction can be the basis for religious life. Like post-modernism, they have only one form of intolerance: other forms of life that are intolerant and authoritar­ian.”

This attitude reflects Neo-Paganism’s origins, not in the occult societies of England, but in the American Counterculture of the 1960s and 1970s. Neo-Paganism can be traced to 1967, when three new religious groups were organized: Frederick Adam’s Feraferia, Oberon Zell’s Church of all Worlds, and the New Re­formed Ortho­dox Order of the Golden Dawn (NROOGD), founded by Aidan Kelly and others.

What all of these Neo-Pagan founders had in common is that they invented their respective religions, conscious of the fact that, though they were drawing from old sources, they were in­venting something new. These writers drew on sources available to them, including British Traditional Wicca, but also modern studies of classical religions, anthropology, psychology, and even science fiction. (The Church of All Worlds is even named after a fictional church in Robert Heinlein’s science fiction novel, Stranger in a Strange Land.) Rather than claiming authority by ap­peals to the past or claims of divine revelation, these religious founders claimed legitimacy by virtue of the efficacy of the tech­niques they offered for achieving connection with nature, reli­gious ecstasy, and psychological integration.

This is not to say that the founders of Neo-Paganism were not inspired—whether it was by God, the Goddess, the Collective Unconscious, or artistic genius. In fact, all of the individuals named above had visionary experiences that helped to define the religions they created. For example, in 1956, Fred Adams had a visionary experience of the “Mysterious Feminine” while reading Eliade’s Myth of the Eternal Return, after which he founded the Fellowship of Hesperides, which evolved into Ferafe­ria. And, in 1970, Oberon (then Tim) Zell had a visionary experience that led to his theory of “Theagenisis,” which antici­pated James Lovelock’s Gaia Hypothesis. Being an invented reli­gion does not mean that Neo-Paganism is not inspired. Rather, it means that Neo-Pagans acknowledge that these founders were inspired to draw from their environment and their own experi­ences to create a religious system, rather than having a religion revealed to them whole cloth.

In 1872, the Anglican priest, William Ingham, argued, in his “Lectures on the Evidences of Natural and Revealed Religion”: “An invented religion may serve the purposes of a philosopher; but dying men and women call for a revelation and a ‘living God.’” Ingham was writing from the perspective of a believer in revealed religion. For many Neo-Pagans, it is the so-called “re­vealed religions” that fail to communicate the presence of the “living God” (or living gods). Many Neo-Pagans experience tradi­tional institutionalized religions as “dry canals.” For them, the living spirit of divinity is better communicated through rit­ual forms that are consciously constructed with the spiritual and emotional needs of contemporary people in mind.

“The notion of ‘invented religions’ is deeply provocative, in that it contradicts the traditional understanding of reli­gion as a phenomenon that traces its origins to divine revelation (as in the case with Judaism, Christianity and Is­lam), or with divine origins so far in the past that individ­ual founders are unknown but venerability is as­sured (as in the case with Hinduism), and asserts that teachings that are not only new but are admitted to be the product of the human imagination deserve that most lofty of designations, ‘religion.’”

“are openly defying the web of conventions that sur­round the establishment of new religions, which include linking the new teachings to an existing religious tradi­tion, argu­ing that the teaching is not really ‘new’ but ra­ther a contem­porary statement of a strand of ancient wis­dom, and establishing new scriptures as authorita­tive through elaborate claims of external origin, in­clud­ing translation, channeling and chronicling of vi­sions. In­vented religions re­fuse such strategies of legitima­tion.”

Wicca began as one such religion that claimed to be a continua­tion of “a strand of ancient wisdom” and was based on purport­edly ancient scriptures (the Book of Shadows). In contrast, Neo-Pagans have no scripture, per se. It is sometimes said that, Chris­tians and Jews are the “People of the Book,” but Neo-Pagans are the “People of the Books.” Neo-Pagans may draw inspiration from ancient pagan writings, but they give equal importance to modern writing, as well as their own creative writing.

The invented nature of Neo-Paganism means that Neo-Pa­gans are less likely to be caught in the trap of trying to legitimate their spirituality by historical claims that may be undermined by contemporary historical scholarship. It is no coincidence that many Neo-Pagans were raised in religions that based their claims to legitimacy on appeals to the past. For many such peo­ple, these claims proved to be unfounded, and so they were drawn to a form of religiosity that was based more on personal experience than on historical claims.

Admittedly, there is plenty of nostalgia for the past in Neo-Paganism. Many Neo-Pagans believe that there was a time, i.e., before the advent of Christianity, when people lived more in har­mony with nature. One example of this is the myth of prehis­toric matriarchy, which has been criticized by many historians. Another is the belief in a universal “Old Religion” that survived into modern times. But, according to Margot Adler, as early as 1979, Neo-Pagans were coming to recognize these myths more as spiritual truths than historical realities. Yet another example is the persistent myth that agricultural (or pre-agricultural) peo­ples are necessarily more ecologically wise than their urban coun­terparts. These are the myths of city dwellers, whose nostal­gia is for a past that never existed.

The point is not that Neo-Pagans do not have their own un­founded historical claims, but the legitimacy of Neo-Paganism is not dependent on these narratives. Rather Neo-Pagans legiti­mate their religion by pointing to the fact that “it works.” Paul Chase explains, “Neo-Pagans invent significance to fit their own interpretations and theological needs, claiming that the value of a symbol is not so much its historical reality as its usefulness as a spiritual tool in the present.” Neo-Pagans adopt the pragmatic attitude that people should believe and do whatever works for them, i.e., whatever helps them to live wisely and meaningfully. What Pagan author, Caitlin Matthews, says about Goddess reli­gion applies equally to Neo-Paganism:

“In finding a myth of the Goddess to live by, there is only one criterion in such a choice: does it work for you? … The rule of the Goddess is that there is no rule and that therefore the only authority on which Goddess religion is based is derived from confidence in one’s own experi­ence. … The Goddess is not an object of faith but of immedi­ate, self-authenticating experience.”

Neo-Pagans follow the injunction of political theorist, Harold Laski, in “The Dangers of Obedience,” “to accept nothing that contradicts our basic experience merely because it comes to us from tradition or convention or authority.” According to Laski, “the condition of freedom … is always a widespread and con­sistent skepticism of the canons upon which power insists.” Neo-Pagans live this principle by constantly questioning their own beliefs and their own institutions. In fact, the imperma­nency of Neo-Pagan institutions is likely a function of this commit­ment to prioritizing experience over tradition.

The invented nature of Neo-Paganism has another conse­quence for its practitioners. Because Neo-Pagans acknowledge that their traditions were invented, individual Neo-Pagans them­selves feel free to add to or redact from tradition as they feel appropriate. In fact, the term, “tradition,” is something of a misnomer when applied to Neo-Paganism, because Neo-Pagan beliefs, practices, and rituals are in a constant state of evolution, driven by individual and group improvisation.