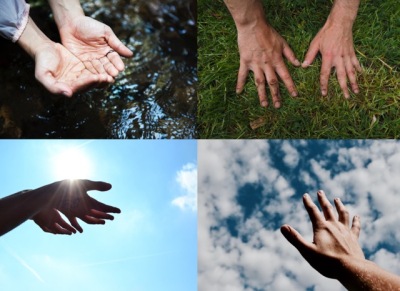 — “The Circle Song” by Wendy Rule

The most common Neo-Pagan ritual form involves the “casting” of a circle and the “calling” of the four elemental quarters corre­sponding to the cardinal directions. The effect can be visualized as a quartered circle, a cross circumscribed by a circle, drawn on the ground. The purpose is to connect the participants to the physi­cal space and sacralize it.

The Neo-Pagan practice of calling the quarters is derived from Wiccan ritual. The Wiccan ritual in turn derives from the Hermetic Order of the Golden Dawn ritual practice of calling the “Watchtowers.” It is possible that there is also a connection to the practice of certain Native American tribes, like the Hopi, of constructing “medicine wheels,” quartered circles that are drawn on the ground. Each quarter of the medicine wheel may be assigned a color, an animal, a stage of life, and/or an element.

The influence of the Native American medicine wheels on Neo-Paganism may have occurred through Ernest Westlake’s Order of Woodcraft Chivalry (OWC), which may have had an influence on Gerald Gardner, Wicca’s founder. Ronald Hutton describes the first OWC folkmoot ceremony held on Lammas in August 1921:

“The sacred fire was lit in the center of a ritual circle, by four people dressed in colours appropriate to the ele­mental associations of each quarter, bearing greetings from its powers and proceeding in succession from east round to north. When it was burning, Westlake deliv­ered the invocation (taken from Socrates): ‘Beloved Pan, and all ye outer gods who haunt this place, give me beauty in the inward soul and may the outward and the in­ward be one.’”

The quartered circle also resembles Indian mandalas, which con­sist of a circle within a square or a square within a circle. The combi­nation of circle and square was believed by Carl Jung to be a transcultural symbol of the union of heaven (circle) and earth (square). For Jung, mandalas were symbols of wholeness, specifi­cally the wholeness of the Self.

In Neo-Pagan practice, each of the “quarters” or cardinal direc­tions corresponds to one of the four classical “elements” described by Greek philosophers: air, fire, water, and earth. The most common associations are East-Air, South-Fire, West-Water, and North-Earth. The four quarters may also correspond to the four seasons, East-Spring, South-Summer, West-Autumn, and North-Winter.

In addition to the cardinal directions, each of the elements is commonly associated with a different part of the self:

These associations resemble Carl Jung’s four “functions”: think­ing, intuition, feeling, and sensation. Each of the elements has other associations, including certain colors, altar tools (sword or knife, wand or candle, chalice, paten or salt), and Tarot suits (swords, wands, cups, pentacles). The quarters are also some­times associated with four aspects of the Moon Goddess (maiden, lover, mother, and crone) and the stages of human life (child, adolescent, adult, elder). The purpose of these associa­tions is to connect our inner experience with our perception of the outer world.

The center of the circle, where the four directions intersect is considered a special place. Some Neo-Pagans associate the cen­ter with a fifth element, quintessence or Spirit. Some also add a vertical dimension by invoking the directions, up and down, in the center of the circle. This creates an axis mundi, a symbolic center of the world, which connects sky and earth. This may be visualized as a tree with its branches reaching into the sky and its roots reaching underground. The vertical directions may have other associations, like spirit and soul or light and dark.

Like other parts of Neo-Pagan ritual, the words used to call the quarters or invoke the elements are idiosyncratic. They may be borrowed from myriad sources or created new for each occa­sion.