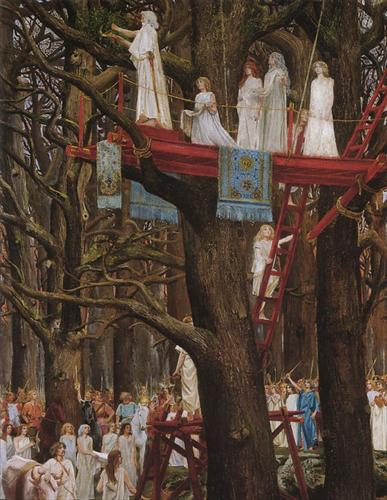 Neo-Pagans often speak about Pagan “paths” or “traditions.” Although these terms are sometimes used interchangeably, they refer to two different things. Neo-Pagan traditions may be roughly compared to other religious denominations. In contrast, Neo-Pagan paths are more like religious styles. For example, Dru­idry is a path, but the Order of Bards Ovates and Druids is a Druid tradition. Some Neo-Pagan traditions are closed and re­quire initiation, but a Neo-Pagan does not need to belong to any tradition in order to choose a path.

Neo-Pagans use many different names to describe their vari­ous paths. They may call themselves “Pagans” or “Witches” or “Druids” or other names. (Not all Witches, Druids, etc. are Neo-Pagan, however.) In general, there are four historical archetypes that Neo-Pagans invoke to describe their style of Neo-Paganism:

Whether a particular Neo-Pagan calls themselves a “Witch” or a “Druid” or a “Shaman” may depend less on their specific beliefs or practices, and more on whether they identify more closely with:

Certain self-designations like “Witch” and “Pagan” are provoca­tive terms that may be deliberately chosen as expressions of pro­test and rejection of Abrahamic values. As religious studies scholar, Cynthia Eller, has explained:

“Saying one is a Witch, is most often a feminist state­ment, the symbolic encapsulation of a feminist political pro­gram. The Witch is the powerful outsider, the des­pised and excluded person who is threatening the estab­lished order. All women are Witches, according to some spiritual feminists, [because] they are therefore com­pelled to be outsiders to a male-dominant society.”

Similarly, saying one is a “Pagan” can be a statement about one’s rejection of certain Abrahamic attitudes, especially the denigra­tion of this world, of nature, of our bodies, and of sexuality.

Those who identify as “Pagan” without any other qualifiers are sometimes called “generic Pagans” by other Pagans, though there is nothing “generic” about their religious practice. “Ge­neric Pagan” is an unhelpful (and vaguely insulting) term. In con­trast, there are many non-denominational Christians who identify primarily as “Christian,” and only secondarily with the congregation to which they belong—but they are not referred to by anyone as “generic Christians.” That being said, a term is needed to distinguish Paganism as a specific path from Pagan­ism as an umbrella term. The term, “Neo-Pagan,” fulfills this func­tion.