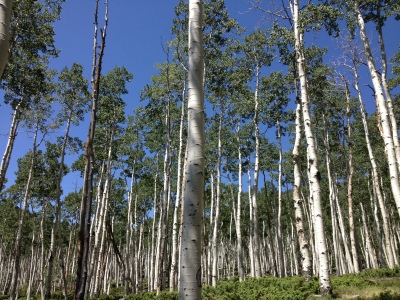 Pando, a clonal quaking aspen stand, that, according to some sources, is the oldest (80,000 years) and largest (106 acres, 13 million pounds) organism on Earth (photo by John Halstead)

Look at a tree. Physically you are connected to the tree by the reciprocal flow of gasses, oxygen and carbon dioxide. As you breathe in, the tree breathes out; as you breathe out, the tree breathes in. The water flowing through the tree may soon flow through your body. Indeed, the very matter of which you are made was probably part of another tree long ago and will be­come part of yet another tree some day in the future.

Moreover, as David Abram explains, the very act of perceiv­ing the tree, touching the tree, is a reciprocal encounter with a dynamic presence: “There is an intimate reciprocity to the senses; as we touch the bark of a tree, we feel the tree touching us. As we lend our ears to the local sounds and ally our nose to the seasonal scents, the terrain gradually tunes us in turn.” It is only by forgetting this sensuous involvement with the world that we are able to describe the tree as an object from which we are separate.

Pagan teacher and author, T. Thorn Coyle, suggests that what­ever individual Pagans believe about the gods, and whether or not they practice magic, Pagans are “concerned with the primacy of direct connection and relationship.” Similarly, Michael York defines paganism as “an affirmation of interactive and polymorphic sacred relationship by individual or commu­nity with the tangible, sentient and/or nonempirical.” Along the same lines, in their survey of religious and spiritual groups in America, Robert Ellwood and Harry Partin explain, “The unify­ing theme among the diverse Neo-Pagan traditions is the ecology of one’s relation to nature and to the various parts of one’s self.” The key word in all of these statements is “relation­ship.” Relationship is central to Neo-Pagan spirituality: relation­ship to the Earth, to our local bioregion, to the other-than-hu­man inhabitants of the Earth, to one another, and to the many parts of our selves.

There is a tendency among Neo-Pagans to define themselves in contrast to the monotheistic faiths, especially Christianity. One of the most common distinctions drawn by Neo-Pagans is that they do not believe in “original sin.” Of course, there are many Christians who do not believe in original sin either, but Neo-Pa­gans’ rejection of the doctrine of the depravity of humankind is about more than a belief in the inherent goodness of all people. The story of the “fall” of humankind (and their subsequent redemp­tion) is at the center of the Christian mythos. It is a story of alienation, followed by reconciliation through the experience of redemption. Christian experience begins with separation, separa­tion from God, but also separation from nature, from our­selves, and from other people. As God is separated from human­kind, so humans are separated from the Earth and na­ture, so our spirits are separated from our physical bodies, so our Cartesian consciousness is separated from our emotions and trans-rational selves, and so we are separated from one another. In this way, the Christian myth of the fall permeates the modern conception of self and world, whether or not we are Christian.

Neo-Paganism represents a challenge to this paradigm of estrangement. Neo-Pagan experience is not one of separation, but of relationship or “relatedness.” As T. Thorn Coyle explains, “Our souls are connected to our bodies, our bodies are con­nected to this earth, this earth is connected to the cosmos, the cosmos is part of some larger flow of space, time, non-space, and non-time.” Theologically, this experience translates into a panthe­istic or immanent understanding of divinity.

Neo-Pagans recognize the modern experience of alienation, an existential sense of “rootlessness” or “homelessness.” But, for Neo-Pagans, this is not our natural condition. It is a symptom of modernity and/or patriarchy. It is manifest in social injustice, domi­nation, and neurosis. Neo-Pagans seek to remedy this aliena­tion by a return to or a reconnection with the imminent divine in the material world. This reconnection is what many Neo-Pagans call the “re-enchantment of the world.” Body theolo­gian, Christine Hoff-Kraemer, explains that, far from be­ing merely an intellectual belief, interconnectedness is “an ec­static state of connection to which one can become attuned.” Neo-Pagans seek to cultivate this experience through ritual and other spiritual practices.