Thoreau’s famous quotation, near his cabin site at Walden Pond

“In my Pantheon, Pan still reigns in his pristine glory, with his ruddy face, his flowing beard, and his shaggy body, his pipe and his crook, his nymph Echo, and his cho­sen daughter Iambe; for the great god Pan is not dead, as was rumored. No god ever dies. Perhaps of all the gods of New England and of ancient Greece, I am most constant at his shrine.”

— Henry David Thoreau, A Week on the Concord and Merri­mack Rivers

Nature Religion in the United States begins with the Transcenden­talists in mid-19th century New England, most nota­bly with Ralph Waldo Emerson and Henry David Thoreau. Both Emerson and Thoreau were early conservationists, promot­ing the preservation of threatened forests.

Emerson is best known as a champion of individualism and a critic of the religious traditionalism of his day. His 1836 essay, “Nature,” marks the beginning of the Transcendentalist move­ment:

“The foregoing generations beheld God and nature face to face; we, through their eyes. Why should not we also en­joy an original relation to the universe? Why should not we have a poetry and philosophy of insight and not of tradition, and a religion by revelation to us, and not the history of theirs? Embosomed for a season in nature, whose floods of life stream around and through us, and in­vite us by the powers they supply, to action propor­tioned to nature, why should we grope among the dry bones of the past, or put the living generation into masquer­ade out of its faded wardrobe? The sun shines to-day also.”

Emerson’s call for “an original relation to the universe” found its way into Neo-Paganism, with its distrust of tradition, its empha­sis on the authority of individual experience, and its focus on reconnecting with nature.

Thoreau is best remembered for his two years spent living in a small cabin on the shore of Walden Pond, which he described in Walden (1854). “I went to the woods because I wished to live deliberately,” he wrote, “to front only the essential facts of life, and see if I could not learn what it had to teach, and not, when I came to die, discover that I had not lived.” Thoreau had a passion and talent for careful observation of natural phenom­ena that is reflected in his writing. His experiment in simple liv­ing would later inspire the back-to-the-land movement that was part of the broader Counterculture of the 1960s and 1970s. 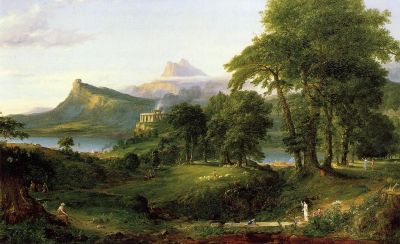 “The Arcadian or Pastoral State” by Thomas Cole, from his “The Course of Empire” series

The Transcendentalists borrowed from the European Roman­tics the notion that regular contact with nature was essen­tial for recovering the human innocence that had been cor­rupted by civilization:

“Few adult persons can see nature. Most persons do not see the sun. At least they have a very superficial seeing. The sun illuminates only the eye of the [adult], but shines into the eye and the heart of the child. The lover of nature is [they] whose inward and outward senses are still truly adjusted to each other; who has retained the spirit of infancy even into the era of [adulthood]. [Their] in­tercourse with heaven and earth becomes part of [their] daily food.”

The Transcendentalists believed that studying nature was a way to comprehend the divine, another idea that found its way into Neo-Paganism. In response to the religious traditionalism of their day, the Transcendentalists proclaimed that the human mind and the natural world were all that was needed for genu­ine spiritual experience. Nature was seen as a source of revela­tion available to all.

The Transcendentalists believed that divinity was found within nature and humanity. While not quite pantheists, they adopted the Neo-Platonic understanding of the world as an emana­tion of a monistic Oneness. The spirit of this divine One animated both nature and the human soul. “Within [human­kind] is the soul of the whole … to which every part and particle is equally related; the eternal ONE,” declared Emerson. “The currents of the Universal Being circulate through me; I am part and parcel of God.”

Both Emerson and Thoreau wrote about healing our aliena­tion from nature:

“A more subtle and severe criticism might suggest that some dislocation has befallen the race; that [hu­mans] are off their centre; that multitudes of [people] do not live with Nature, but behold it as exiles. People go out to look at sunrises and sunsets who do not recognize their own quietly and happily, but know that it is foreign to them. As they do by books, so they quote the sunset and the star, and do not make them theirs.”

“As if our birth had at first sundered things, and we had been thrust up through into nature like a wedge, and not till the wound heals and the scar disappears, do we begin to discover where we are, and that nature is one and continuous everywhere.”

In some ways, the “Nature” of the Transcendentalists was more abstract or symbolic than might be apparent to modern readers. In fact, it could be argued that the Transcendentalist movement was more Self-centric, than Earth-centered. Nature was seen by Transcendentalists as merely the context for self-explo­ration or a resource for human growth, a means to spiritual enlightenment, rather than an end in itself. Neo-Pagans still strug­gle with this issue in some ways, in their effort to reconcile exoteric* Earth-centered principles with the esoteric** Self-cen­tered practices that they inherited from Wicca.

The Transcendentalists drew the attention of the wider Ameri­can culture toward a concern for nature, inspiring genera­tions of conservationists and environmentalists to come, and her­alded the development of Neo-Paganism as a nature religion.

* “Exoteric,” which is contrasted with “esoteric,” describes knowledge and practices which are accessible to the general public, without initia­tion into a secret or closed group.

** “Esoteric,” which is contrasted with “exoteric,” describes secret or hidden knowledge is available only to a small, elect group and only through intense study.