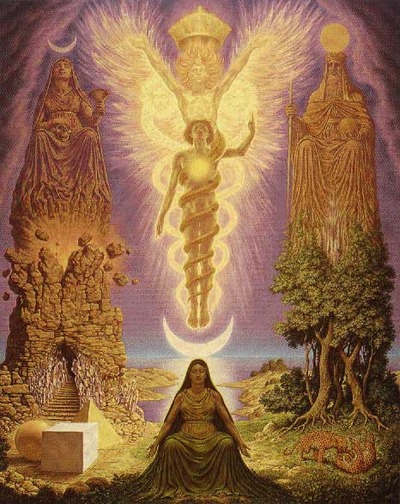 “The Vision of Hermes Trimegistos” by Johfra

Neo-Pagans are often lumped together with the New Age move­ment (such as in national surveys). While the two movements do overlap somewhat, they are distinguishable. Neo-Pagans are typi­cally critical of the New Age movement for its emphasis upon light, mind, spirit, and transcendence, to the detriment of darkness, body, matter, and immanence. Neo-Pagans reject the New Age quest for perfection and mastery, and seek rather an engagement with ambiguity and finitude.

Many New Agers believe there is a cosmic struggle between the forces of Light and Darkness, and human evolution depends on humanity thinking positively, embracing the “light” and spirit, and abandoning the darkness and earth. Neo-Paganism, on the other hand, rejects this gnostic denigration of matter and darkness, and celebrates the world as it is. New Agers seek to escape into an eternal existence of light. For Neo-Pagans, however, darkness is necessary. Life is born in the dark womb. Seeds germinate in the dark soil. It is in the dark night that we dream. And it is the Dark Goddess who is our origi­nal Mother. Neo-Pagans celebrate the beauty of nature and do not flinch from the fact that it is “red in tooth and claw.” In the eyes of Neo-Pagans, the dark is seen, not as evil, but a neces­sary part of our natural world and our spiritual being.

How Neo-Paganism and the New Age movement are simi­lar:

How Neo-Paganism and the New Age movement are different: