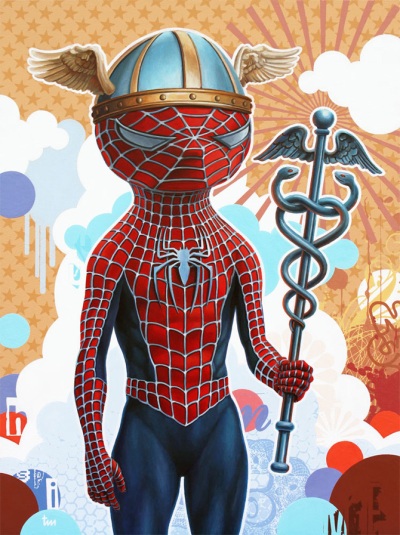 Spiderman as Hermes by Tim Maclean

“A person has no religion who has not slowly and pain­fully gathered one together, adding to it, shaping it, and one’s religion is never complete and final, it seems, but must always be undergoing modification.”

Neo-Paganism is eclectic. Neo-Pagans consciously draw to­gether different religious ideas, symbols, and practices, and com­bines them into new forms. Cultural anthropologist, Sabina Magliocco, explains in her essay, “Ritual Is My Chosen Art Form: The Creation of Ritual as Folk Art Among Contemporary Pagans,” that “Neo-Pagan ritual artists are adept at combining and adapting materials from widely divergent sources, cultures, historical periods, and media into a harmonious whole. They are by nature bricoleurs.”*

The term, “eclectic,” is often misunderstood or misapplied. While all religious movements mix and match traditional ele­ments with new ideas and practices from other sources, not all religious movements are consciously eclectic. It is useful to think of eclecticism and traditionalism as existing along a continuum, rather than two distinct categories. So while Neo-Paganism is highly eclectic, there is still a core of Neo-Pagan beliefs and prac­tices. The degree of conscious blending also varies from practi­tioner to practitioner.

Eclectics probably represent a majority among Pagans. Accord­ing to sociologist, Helen Berger’s, census of Pagans, “Eclec­tic Paganism” was the most common self-descriptor (53%). In addition, nearly a quarter stated that they “are spir­itual but dislike labels.” In contrast, only 38% identified as Wic­can.

In the past, there has been tension in the Pagan community between Eclectic Neo-Pagans and Wiccan traditionalists. Accord­ing to religious studies scholar, Shelley Rabinovitch,

“Eclectics will often perceive the Gardnerian-derived groups as hidebound, hierarchical, and slavishly adher­ing to received material, while they in turn view eclectics as fundamentally missing the point of the entire practice, diluting the mystery tradition to the point of unrecogniza­bility with ‘surface’ rituals.”

Today, a similar tension exists between eclectic Neo-Pagans on the one hand and reconstructionist Pagans and devotional polythe­ists on the other.

The growth of eclectic Neo-Paganism was initially a function of the scarcity of traditional resources in the 1960s and 1970s, com­bined with the increasing demand brought on by the Counter­culture movement. The growth of eclectic practice is also tied to the growth of solitary practice (i.e., practice without a group) among Pagans. Scott Cunningham, author of Wicca: A Guide for the Solitary Practitioner (1988), is credited in large part with the spread of solitary practice. Increased access to the inter­net accelerated this growth. According to Helen Berger’s Pagan Census, there has been an increase in solitary practice from 51% in 2003 to 79% in 2010.

* A “bricoleur” is one who creates using whatever materials are availa­ble.